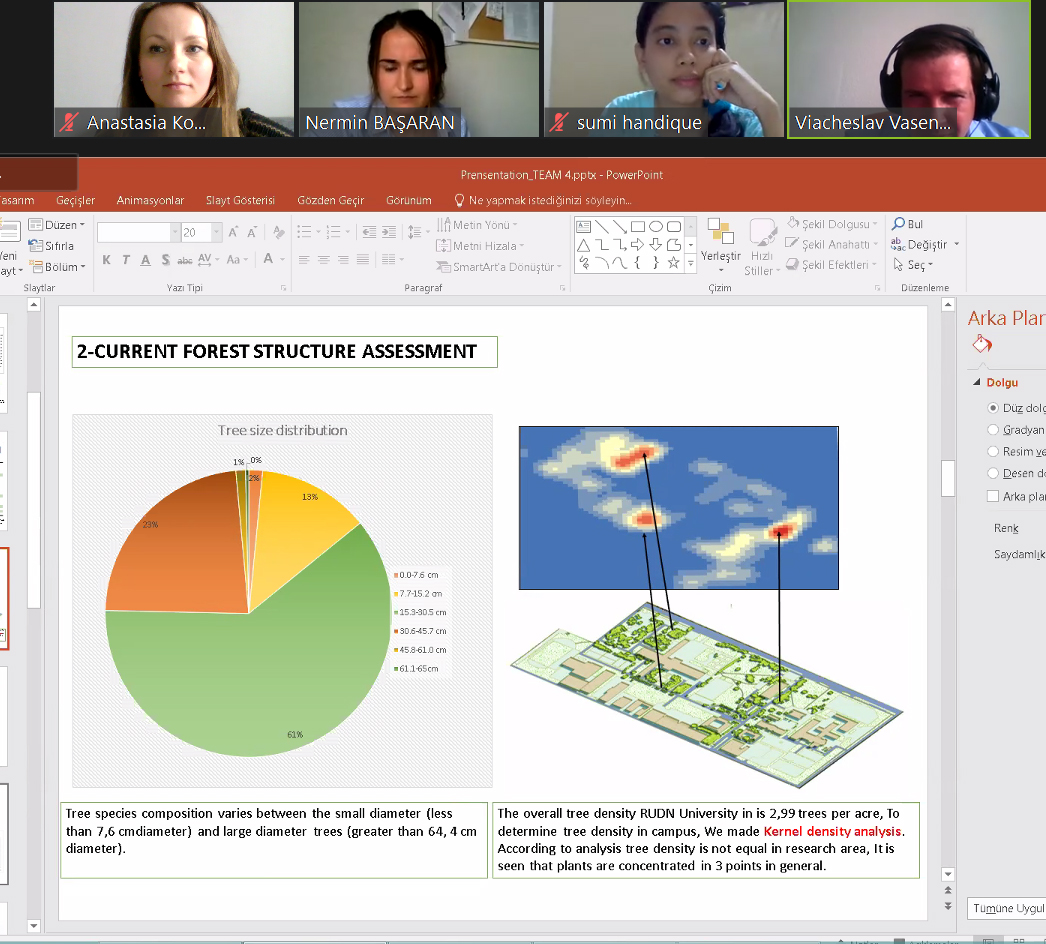 From July 3-13, 2020, the IV International Summer School 3MUGIS (Monitoring, Modeling and Managing Urban Soils and Green Infrastructure) was held on the basis of the Department of Landscape Design and Sustainable Ecosystems at RUDN University. The school is organized with the support of the Russian Science Foundation (RSF) and under the umbrella of the International Union of Soil Scientists (IUSS) and the New York City Soil Institute in collaboration with universities, research institutions and research groups from around the world.

The traditional format of the summer school involves a large-scale field tour in the European part of Russia from the Barents Sea to the ​​Azov Sea, during which participants in practice study the zonal diversity of soils and landscapes and evaluate the results of anthropogenic impact on the ecosystem. However, in 2020, for the safety of participants and speakers in the situation of the COVID-19 pandemic, the organizers decided to hold a summer school in an online format. Despite the limited opportunities and the shorter duration of the school, the organizers tried to create a multifunctional format for intensive and exciting lectures, seminars, workshops, master classes and group projects.

The main motivation for conducting the 3MUGIS school is our desire to combine the basic sciences of soils, plants and the environment as a whole with more applied fields of knowledge – landscape architecture, urban planning and the management of urban ecosystem services, – Vyacheslav Vasenev, Associate Professor at the Department of Landscape Design of Sustainable Ecosystems and the project coordinator.

The summer school was attended by almost 40 students and young scientists from Russia, Austria, the USA, Georgia, India and Kazakhstan. A distinctive feature of the 3MUGIS school is the international composition of not only participants, but also speakers. In addition to the scientists from the RUDN Smart Urban Nature Lab, well-known soil scientists, climatologists, biologists from France, Germany, Italy, Australia and the USA were the speakers at the summer school.

At the opening ceremony, participants were welcomed by Tatyana Morin, Director of NYC Urban Soils Institute (USA) and co-organizer of 3MUGIS: “Today, due to the growing anthropogenic impact and many negative consequences that our ecosystem is experiencing, we are forced to look for new ways to solve problems in the field of climate change, soil pollution, waste disposal and so on. However, we must solve not only current environmental problems, but also strategically build an approach that in the future will prevent such problems as a matter of principle. That is why the holding of the 3MUGIS Summer School is so important – it forms new generations of scientists for whom the prevention of an ecological disaster will be more important than mitigating its consequences”.

The summer school program combined both theoretical and practical blocks, including lectures, workshops and practical tasks, as well as the preparation and defense of joint projects. From July 8 to 10, participants of 3MUGIS could take part in International Conference Smart and Sustainable Cities, which also took place online and gathered more than 150 participants from the CIS countries, Germany, France, Italy, the USA and Australia.

During the summer school, more than 20 lectures were held, where students learned about new approaches in eco-monitoring and modeling of urban ecosystems, studied the biochemistry of urban soils and plantations, addressed issues of ecosystem services and urban climate. 3MUGIS partners – scientists from the Kola Science Center of the Russian Academy of Sciences (Apatity) and the Southern Federal University (Rostov-on-Don) welcomed the participants with short lectures and a guide on the characteristics of local soils and vegetation. In addition, participants received valuable advice and life hacks on writing scientific paper from one of the most cited soil scientists in the world – Yakov Kuzyakov, head of the Department of Soil Science at the University of Gottingen (Germany) and Michael Leuchner,  who served as editor of the Earth Sciences, Geography and Environment sections in Springer Nature. 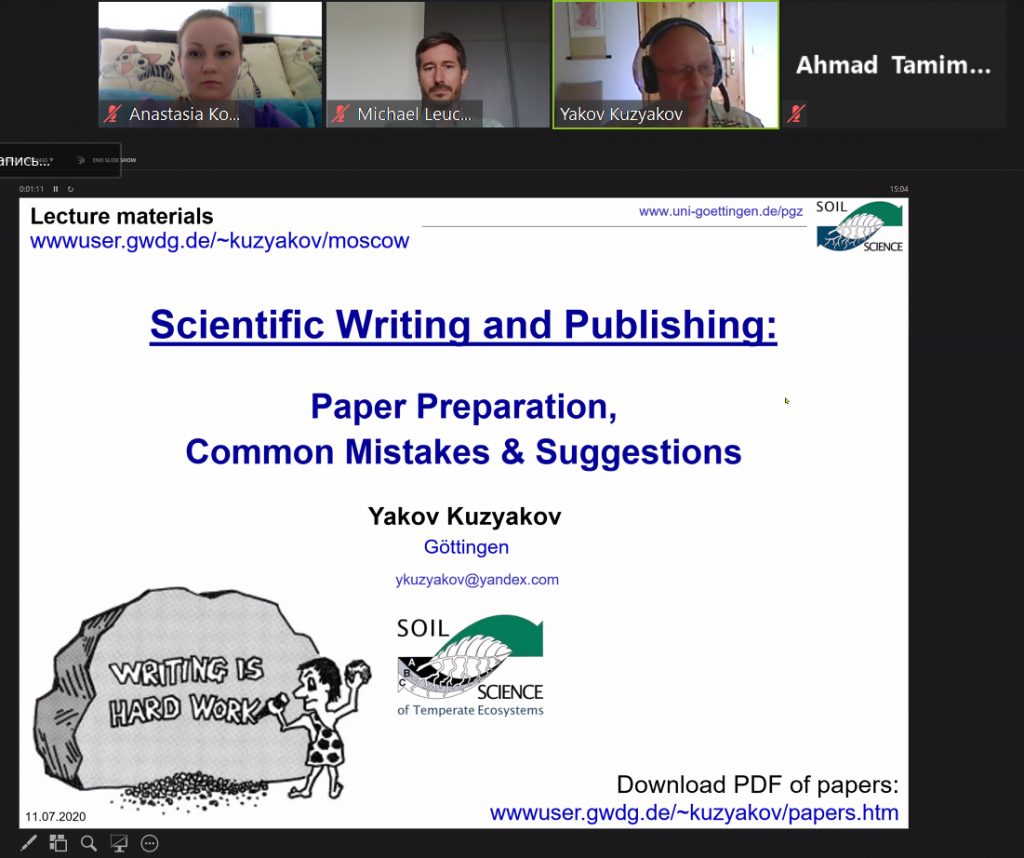 The final day of the summer school was devoted to defense of group projects on the redesign and reconstruction of the territory of the RUDN University into a smart and sustainable campus. Four mixed teams presented their vision of creating a modern and green university campus, planning every detail – from a noise attenuation in recreation area and air quality control to green roofs and landscaping parking spaces. Thus, the project work allowed participants with different backgrounds and approaches to learn how to collaborate in teams and apply the knowledge gained in the summer school.

“We are very pleased with how our school went. Despite difficult circumstances, we even managed to assemble an online team of reputable experts and ambitious participants from different countries, with different backgrounds and views on modern urban development. And we are confident that thanks to 3MUGIS, a new generation of young scientists will be able to take a new step in research, using the skills and knowledge acquired in our school,” said Elvira Dovletyarova, director of the Agrarian and Technological Institute of RUDN University.